Mad Max with the baby narrative returning from paternity leave. The Royals haven’t started July off very well holding a 74 wRC+ with a strikeout rate over 24% against righties. Scherzer is one of the best in the game and he’s possibly the best fantasy pitcher in the game. In cash try your best to make him work, in GPPs it’s not as high of a priority but he still seems hard to get off of.

Snell got blasted by these Yankees earlier this year in Yankee Stadium. Snell has seen the Yankees a lot over his young career and he has pitched a whole lot better against them at home in Tampa. We have the 21st ranked pitching umpire and while that isn’t exactly high it’s nice to see one favoring pitchers especially when you’re against a tough team like the Yankees. The Yanks have some lefty mashers for sure but they also strikeout a lot against south paws at least this year.

CC balled out against these Rays in earlier in Yankee Stadium. Today he gets a huge park boost in Tampa and the Rays have definitely been worse to lefties this season. While the Rays have struggled offensively against lefties their strikeout rates have sunk a bit, CC’s price is up to a point where he becomes risky even in this park especially considering how short of a leash the Yanks typically have their starters.

Smith makes his return after a long I/L stint. He made two rehab starts in AA where the strikeouts were in abundance. He struck out 19 total in 9.1 innings across two starts however he did give up two homers in each of the starts. The Braves are a very good offense and they have been playing well lately but the strikeout rates can creep up against lefties. This is one we will want to see the lineup for but Smith should be low-owned against the Braves and the price is lower than we have seen on him most of this season.

Porcello gets an old team of his in the Tigers. The Tigers have been strikeout a ton this year and they’ve developed a bad habbit at swinging at pitches outside the zone. Porcello isn’t exactly dominant these days but he has proven to still be a decent pitcher and the price on Porcello is pretty low considering the match-up. Porcello makes sense in all formats as a cheap pitcher.

Terehan did the dirty to the Marlins yesterday and now Fried gets another shot at it today. Fried posted a 17 (DK) earlier this year against the Marlins though that was in Miami, a much better pitching park. So far in July the Marlins are actually second in the league in strikeouts to lefties with a 32.6% strikeout rate and a 58 wRC+. Fried makes sense in cash games to help you reach Scherzer and in GPPs you can pair him with whomever and load up.

Betts appears to be waking up and he has the history against Zimmerman. JD is fine if you prefer him but I give the slight edge in priority to Mookie. If you can get them both that would be ideal.

The Red Sox should be the chalk once again and for good reason against Zimmerman. Zim has kept his hard contact rates down in a small sample this year but he is going to see a really potent offense followed by a bad bullpen. The Red Sox ended up posting a big number last night despite a slow start and lengthy delay. They’ve rested a bunch of their good hitters so I am little lower on them but they will have salary relief. BOS – Betts, Devers, Chavis, Benintendi/Bradley Jr., Vasquez/Leon.

The Nats didn’t follow through on their massive total last night but they get another chance today with great hitting conditions in their home park against Glenn Sparkmann who has given up a ton of hard contact. The Royals pitching staff and bullpen have trolled a lot lately and the Nats have quietly played well. The Nats should be popular but for good reason. WAS – Turner, Rendon, Soto, Zimmerman, Dozier.

The Indians are pretty left-handed heavy which could be trouble for Anthony DeSclafani. We have a great park for hitting and a pitcher who’s given up a hard contact rate of 50.8% against lefties. The Indians have been flat out bad offensively for the most part at least when we compare them to recent Indian teams. The Reds have a great pitching coach and a good bullpen but their bullpen is also pretty right-handed after losing Amir Garrett to the I/L. CLE – Lindor, Kipnis, Santana, Ramirez, Naquin/Bauers.

The Pirates have been one of the hottest offenses in the game lately. In the month of July the Pirates have the second highest ISO in the league against righties. It’s warm and humid in Pittsburgh and Houser has really struggled with left-handed hitters. The Brewers bullpen is pretty damn good which always gives a pause but we have a run total over 10 and a red hot offense. PIT – Frazier, Dickerson, Bell, Marte, Reynolds.

The Brewers have been pretty cold but they appeared to wake up a bit last night. They get a rookie in Agrazal who has actually pitched decent in his two MLB starts but really struggles to miss bats. The Brewers strikeout more as a team so they could help him with that but they also have a ton of power which could be trouble for the rookie. MIL – Grandal, Yelich, Moustakus, Hiura, Arcia/Saladino.

Players I’ll have the most exposure too. 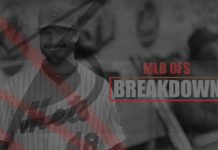 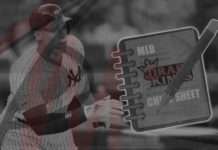 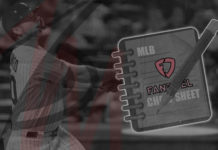