Yang was one of the top pitchers in the KBO last season both from a real baseball and fantasy perspective but this season his numbers aren’t really close. His FIP is almost doubled, his strikeout rate is down from 22.3% to 16.07%, his K/BB ratio is down from 4.66 to 2.25 and his HR% is up from 0.82% to 2.68%. He draws a friendlier match-up here against the Giants so that could certainly help and despite the numbers not looking as pretty, he did post a 22.7 (DKP) against Doosan and a 24.5 (DKP) against SK before getting slammed for six earned runs by the KT Wiz. I am not going to be afraid to play him at high exposures but we do have a couple of interesting options today.

Warwick has the skills of a good KBO domestic pitcher. He isn’t a big strikeout guy but he seems comfortable pitching to contact and for the most part he does a pretty good job. His strikeouts are down from last year which isn’t great because his strikeout rate wasn’t pretty to begin with and the match-up against Kiwoom is scary especially due to the fact that they have been heating up. Still Saupold is one of the top pitchers on the slate, though I will use him more as a lower-exposure pivot assuming he’s lower owned than Kelly and Yang. Not a ton of interest here but he’s in the pool.

Despite an ERA of 4.05, the rest of Kelly’s numbers look even better than last year. Kelly’s FIP is down to 2.00, his strikeout rate is up to 22.73% and his K/BB ratio is up to 3.33 from 2.21. Kelly also gets a favorable match-up against Samsung at home in a park that has graded out as a pitcher friendly park thus far both in HRs per game and runs per game. Hard to argue against Kelly here aside from what his ownership should look like. Kelly seems like the top option when weighing all factors.

Sampson has only had one start in the KBO and he was limited to 59 pitches. While he currently has a 5.40 ERA, he has a 2.20 FIP, a 21.43% strikeout rate and a K/BB ratio of 3. With that said it’s way too early to judge him yet and we should assume he is still on some sort of limit but perhaps it’s 70-80 tonight, at his price on DraftKings he could actually be a decent play but lacks ceiling and we have a couple guys that have big ones.

Lee has pitched in three games in 2020 only starting one, before that we hadn’t seen him in the KBO since 2017. Basically we know nothing about him but what we have seen through those three appearances was pretty good. Again it’s too small of a sample to make a real judgement but in GPPs he’s at least showing some sort of capability for upside at a low price. He has a tough match-up with the Dinos but they strikeout and so far Lee has a 25% strikeout rate and a K/BB ratio o 4. His one start was against Doosan and he went 5 1/3 innings giving up 1 earned run on three hits and a walk, and he struck out three hitters on 73 pitches. Perhaps he gets a bit of a raise in pitch count today, and again the Dinos strikeout more than Doosan.

The sickest name in baseball here or at least in the KBO. We don’t know anything about this dude. He pitched one time in the KBO last year and was shelled by the Dinos. He pitched one inning of relief this year and walked one person without giving up any hits or earned runs. He only threw 14 pitches so we have to wonder how long he can go. Perhaps he’s an opener or perhaps they let him grab a few innings, either way he’s very cheap and he has the one of the best match-ups on the board against Hanwha. I’ll keep in the pool for the sake of punting if needed but not a main play for me.

The Wiz are one of the top offenses in the league and they face Young Chan Lee from the Doosan Bears who has a 5.88 FIP, a 1.754 WHIP, an 11.88% strikeout rate and a 4.95% HR% in 2020. The Wiz are home in their park which is currently ranked first in runs per game. Not only has Lee been terrible but the Doosan bullpen is ranked 9th in ERA so far this season. KT has looked strong and expect it to continue as this game has a 13 run total.

The Bears took full advantage of playing on the road yesterday and pummeled Despaigne. Doosan’s park is grading out so far as one of the best pitching parks in the game so we will want to take advantage when they are on the road in hitter friendly parks. Today they face Hyeong Jun So who has a 4.75 FIP, a 1.662 WHIP, a 6.67% strikeout rate and a 3% HR% in 2020. The Bears are one of the top offenses in the league and not only is this a park boost but the KT Wiz are the only team with a worse bullpen ERA than the Bears. Again this game has a 13 run total and the Bears are favored here.

The Wyverns do appear to be heating up after a horrid start to the season. Today they face Sung Young Choi of the NC Dinos who has a 2.70 ERA but a 7.62 FIP, a 6% strikeout rate and a 6.67% HR% in the early going. The Dinos have one of the best rated parks for HRs at least so far in 2020 and SK should come in fairly low-owned as they have every night. The Dinos bullpen hasn’t been as bad as others but they were expected to have a bottom half bullpen going into the season.

The Twins currently have the highest team ISO at .194. Their park grades out as a pitcher friendly park so far but perhaps the power can negate the park. The Twins will face Yoon Dong Heo of the Lions who we don’t have much of a sample on. Heo has a 0 ERA but a 5.70 FIP with a 4.17% strikeout rate. LG is certainly a big test for the youngster and again they have the best power numbers to start to season. 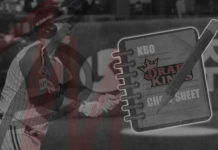 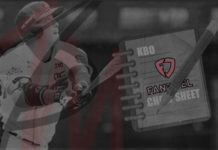 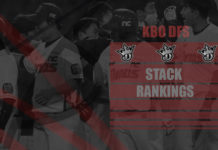