Obviously the best QB in this league on the best offense, he’s expensive but your paying for a high floor with a massive ceiling.

The LA offense has looked pretty good as well and Josh Johnson has a lot to do with that. He’s cheaper than Walker and has shown a solid floor.

Cardale started the season with two home games and looked competent, he then played two straight road games and has looked awful. He’s back at home and his price has fallen making him an interesting bounce back candidate.

The rushing upside is worth getting exposure too. He ran 16 times last game, his ceiling is massive due to his rushing abilities but his floor is low as his team does like to run the ball.

If you need to save money at the position Cornelius has had two solid games in a row and is signifncalty cheaper than all the options mentioned above. Tampa Bay has been running the ball a lot but he has still managed to throw the ball 31 times in each of the last two games.

DC has been getting destroyed by running backs. Last week they gave up over 100 rushing yards each to both of the TB running backs. He’s questionable so pay attention here but his coaches seem to think he’s trending in the right direction.

LA gave up 82 yards on 18 carries to Darius Victor last week. Tampa Bay has also been pretty run heavy especially since losing their starting QB at the beginning of the season.

With no Landry Jones perhaps we see Dallas go a bit more run heavy. Jones normally passes to his tight-end and running backs a lot but we did not see a lot of that in week one which Landry missed.

Farrow has a reasonable price tag and has gotten decent work. Nothing major but Dunbar had some success against them last week. Seattle’s predicted trailing game script could hurt but perhaps he gets some pass game work.

Dunbar has gotten a lot of pass game work but again with no Landry Jones we don’t know if he will get the same opportunities. Still he’s performed well getting rushing attempts and targets.

Pay attention to the status of Martez Carter from LA. The last time he played he got three rushing touchdowns and LA has struggled to find a true running back. He’s dirt cheap and if he plays I’d be more than willing to take some shots at his price.

Sammie Coates is out and Khalil Lewis is questionable. Phillips was held in check last week but he has been a top target for Walker.

McBride has been a favorite target of Josh Johnson and LA has struggled to run the ball.

Williams has gotten some heavy work for Tampa lately, don’t see why it wouldn’t continue.

Rogers has gotten targets but Cardale has been awful. I expect the ownership on the DC offense to be low but we know they can be competent.

Same goes for Rashad Ross, the targets were up last week but his QB had problems delivering. Perhaps at home Cardale shows up.

With Matt McGloin returning and McKay’s price dropping why not take a shot on the player that was expected to be the number one for New York.

Similarly to what we said about Cardale and his teammates, bounce back at home or they just truly suck.

Tolliver had a down week last week as his team ran a lot but we have seen him with opportunities in the past.

Like McKay, Powell should benefit from having Matt McGloin back. He had six targets in week one. He’s extremely cheap. 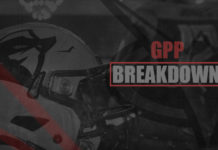